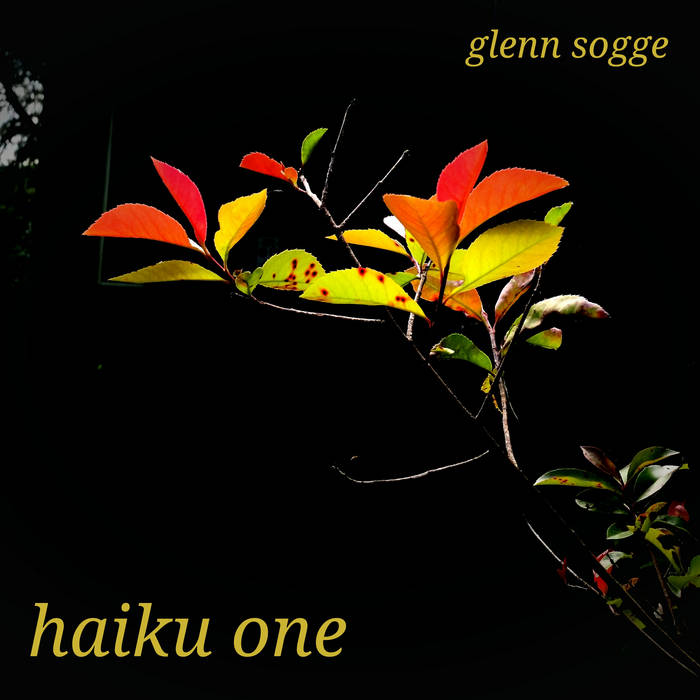 Gwynplaine de Pétroleuse Taking somewhat of a departure from the style on Chilled, Haiku One still is extremely relaxed and soothing Ambient. This time backed with the sounds of bells, trains and moving water instead of light percussion. A marvelous album. Favorite track: Rowing Through.

Each track has additional information attached. All album details are in the pdf booklet.

Artist Glenn Sogge is no stranger to music! Early in his career, he studied with Luciano Berio, Tom Willis, Jack Burnham, Frederic Rzewski, and Sonia Landy Sheridan. He also collaborated on performances with Robert Moran. Glenn has done collaborations with Cousin Silas, Candy L, Jaime Munarriz, Boson Spin, Marco Lucchi, Lutz Thuns , Tuonela, grum-pe, and many others in addition to his extensive solo work.
Haiku One is yet another stage of development for this very gifted musical / sound artist. Each piece of the 16 on the album was crafted to a lovely Japanese inspired haiku. The resulting compositions are simple, beautiful, musical poems. At turns ambient, dark ambient, and experimental, the collection is over two hours of meditative joy! Studio is very pleased to bring it to you. Enjoy Haiku One.

This collection has been made possible with the cooperation of
Marco Sebastiano Alessi and Naviar Records.
The Naviar Haiku project is a weekly challenge by Naviar Records (www.naviarrecords.com) for sound artists to produce a work of music in no more than seven days. Each week, a haiku poem and an image are posted as inspiration. As of December 1, 2017, 204 weekly challenges have been published. Hundreds and hundreds of pieces have resulted from the community.

Words from the artist:
This album collects some of the my contributions to the project.
A special thanks to Marco for choosing two of my haikus to use in the challenges.
I anticipate another haiku collection and also one from the Renku project which used poems in the Renku style (written collaboratively) to inspire musical collaborations.

Glenn Sogge: compositions and music, album cover
Boson Spin: Collaborator on "Far Away From Home, I Make A Grass Pillow"
Freesounds.org: additional sounds under CC licensing
Haiku poems: All poems and poets are identified in individual track information as well as in the bonus pdf booklet.